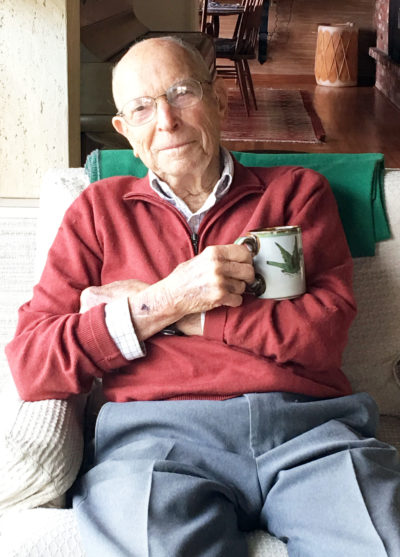 Don Dawson was a true friend of the library.  Always an exceptional supporter and an enthusiastic booster for the Friends, he was a significant donor to the Miraleste Library remodel in 2007. He loved coming to the Annex on Monday mornings where his friends gathered to have coffee and catch up with each other.

Born in Kansas City, Missouri, Don moved to Pasadena, California, as a youngster with his older brother, Robert, and his parents, Robert Earle Dawson, a businessman who later became mayor, and Grace Strickler Dawson, an accomplished poet and writer.

In 1941, fresh out of Cal Tech—graduating in electrical engineering—he launched his career at North American Aviation as an industrial engineer.  That same year he married Juliana (Judy) Woodward.  Don was involved with many successful business ventures throughout his life.  He was most proud, however, of his civic endeavors: as a trustee for the Manhattan Beach Elementary School District (1954-1960), and as trustee and then president of the board for the Palos Verdes Library District (1983-1987) during the time of the construction of the new Peninsula Center Branch.

At the age of 50 Don took up flying and, with a single engine Cessna, he and Judy flew together on adventures throughout the States, including Alaska, extensively into Mexico, and even as far as the Bahamas.

With his engaging, agile mind, his generous heart, undaunted energy, and adventurous spirit, he made many friends and was heartily admired and adored.